Description:  Soft tofu in a red pepper and seafood based broth.   Usually served in an individual sized hot-pot.  Crack an egg over the soup when it arrives at the table, and it will cook from the heat.

Description:  It’s basically bacon on steroids.  The name literally means 3-layer cut, referring to the two layers of fat and one layer of actual meat.  Not the healthiest meal around, but it’s by far the most common and popular version of Korean Barbecue.  Of course, you cook it yourself at the table, and eat it piping hot off the grill.  For a big and delicious bite, you can dip a piece of meat in red pepper paste and wrap it in a lettuce leaf along with garlic and beansprouts.

Description:  Kimchi is an acquired taste, but it’s probably the most famous Korean food because of it’s ubiquity–it’s served as a side with just about everything.  Kimchi is never a main course, although it’s unique flavor makes it a central ingredient in many main dishes.  There are many different types of kimchi, such as cabbage kimchi (the most common), cucumber kimchi, radish kimchi, cubed radish kimchi, green onion kimchi, and more.

Description: Bibimbap is a simple dish.  In essence, it’s just rice mixed together with whatever ingredients are available.  Traditionally, these ingredients include mostly vegetables, fungi, and egg.  Sometimes small amounts of meat are also included.  These mundane ingredients are literally spiced up by red pepper paste, which is usually added by the diner according to his or her own tastes.   The most famous version of Bibimbap comes from Jeonju, since this city was historically the capital of Korea’s most fertile agricultural region and had the widest variety of fresh ingredients available.  Bibimbap is especially delicious when served in a hot stone pot, which keeps the ingredients warm and gives the rice at the bottom a nice crispy texture.  This variation is known as Dolsot Bibimbap.

Description: Bulgogi technically means fire-meat.  Usually it is thinly sliced or shredded beef.  What makes bulgogi special is the salty soy-based sauce in which it is marinated.   When served over rice, it is often called Bulgogi Dop Bap.

Description:  Samgyetang a gourmet spin on the chicken soup your mother may have made for you when you were sick.  Typically, it includes a whole small chicken that has been cleaned out and stuffed with glutanous rice, garlic, dates, and other spices.  If you’re feeling under the weather, or even if you’re not, this dish is truly soothing and delicious.

Description: Noodles served in cold beef broth- the soup is refreshing. There is also bibim naengmyeon, which doesn’t have soup but is mixed with red pepper paste instead.

Description: Various seafood are boiled before adding red pepper paste and red pepper powder. The broth is both refreshing and very spicy.

Description: Kimchi Jiggae gets its rich broth from pork browned in the bottom of the pot before water and kimchi and red pepper paste are added.  This dish tastes better when sour (read: old) kimchi is used.  Other important ingredients include tofu and scallions.  Kimchi Jiggae can be served in individual portion stone bowls or simmered in larger portions at the table.

Description: Dalk Galbi involves chicken ribs, usually boneless, grilled at the table in a red pepper and garlic sauce.  Other common ingredients include cabbage, sweet potato, ddeok (rice cake), and scallion.  The city of Chuncheon, as the poultry capital of Korea, is especially famous for this dish. 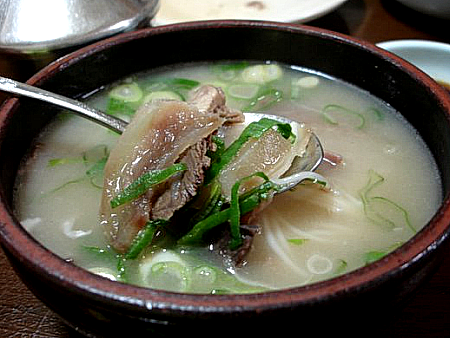 Description: Beef is added to beef broth and stewed for a long time before being served with rice and various seasonings. The deep, rich taste of the broth, boiled for over 10 hours, is simply delicious.

Description: Ribs are boiled with radishes to create a savory soup. Eaten together with rice, the broth is a delight.

Description: Juk is a rice porridge, similar to Congee.  The rice gets is soft texture after being boiled for a long time, along with sesame oil. There are many variations of juk such as pine nut juk, sesame juk, jujube juk, red bean juk, beef juk, pumpkin juk, and abalone juk.

Description: The name Gamja Tang means potato stew, but this dish is more accurately characterized by its soft slabs of pork spine and rich broth.  Other important ingredients include scallions, ddeok (rice cake), sesame leaves, potato noodles, and hot pepper.  Gamja Tang is typically served in a large pot for two or more and simmered at the table.  A smaller and simpler version known as as Beo Haejangguk is served in individual-sized hot bowls and is especially popular for breakfast, after a night of heavy drinking.

Back to Eat & Drink